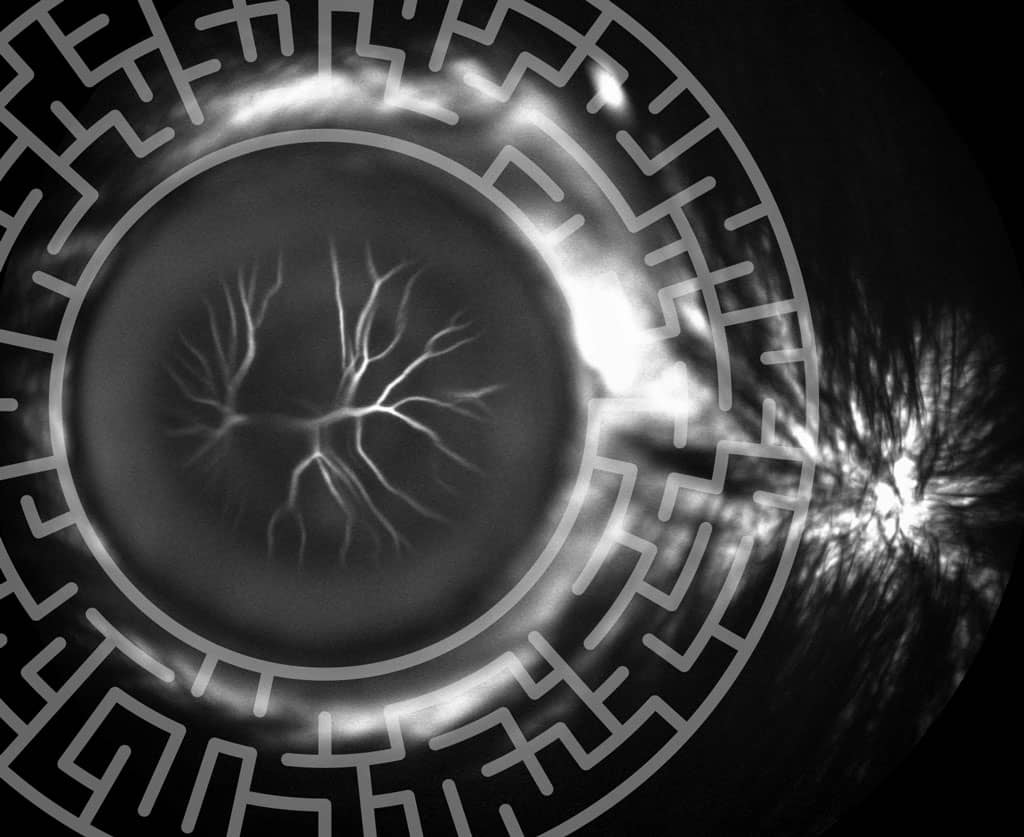 Oxygen-induced retinopathy model mimics retinopathy of prematurity and human ischemic retinopathies. Retinopathy of prematurity (ROP) affects premature infants that weigh less than 1,250 grams or that are born before 31 weeks of gestation. ROP is a potentially blinding eye disorder. As advances in care for premature neonates have reduced the impact of ROP, a significant number of infants will require treatment for severe ROP. About 400-600 infants each year in the US become legally blind from ROP [1].

ROP progresses in two phases. In Phase I, a delay in retinal vascular development with modest vaso-obliteration is observed [2]. The subsequent vascular repair phase (Phase II) is characterized by pathological neovascularization [2].

Retinal angiogenesis in rodents occurs postnatally, providing a model system to study the development and growth of the retinal vasculature. Newborn mice, for example, have an almost avascular retina that develops after birth until full vascular maturation is achieved around postnatal day (P) P21–P25 [3].

Two rodent models, mouse and rat, are commonly used to study the pathophysiology of ROP and to test the preclinical efficacy of drug candidates for ROP. The two models differ in their mode of induction (chronic hyperoxia in mice versus alternating hyperoxia/hypoxia in rats; see details below) and in the manifestation of their vascular phenotypes. In mice, vaso-obliteration occurs primarily in the central retina. In contrast, vaso-obliteration is more peripheral in the rat oxygen-induced retinopathy model and in human ROP [3].

There are various considerations for the choice of the mouse versus the rat oxygen-induced retinopathy model. While the rat model more accurately mimics human ROP, the mouse model offers a robust, fast and reproducible means to induce phenotypes of vaso-obliteration and neovascularization. Furthermore, the mouse oxygen-induced retinopathy model is amenable to genetic manipulation by providing a platform for testing transgenic animals.

Study designs for the mouse and rat oxygen-induced retinopathy models

At Experimentica we have fully implemented and validated both the mouse and the rat oxygen-induced retinopathy model. Our protocols follow the standard protocols in the field [3, 4], summarized in Figure 2.

In the rat oxygen-induced retinopathy model, newborn rats are exposed to an alternating protocol of 50% oxygen (hyperoxia) and 10% oxygen (hypoxia), cycling every 24 h between birth (postnatal day 0, P0) and postnatal day 14 (P14).

In contrast, mice (postnatal day 7) are exposed to chronic hyperoxia (75% O2) for 5 days and subsequently returned to normoxic conditions and sacrificed at P17, as originally described [5].

In most studies, treatments are administered at postnatal day 14 (P14). At Experimentica, our scientists are specialized in ocular drug administration and routinely perform intravitreal injections in mouse and rat pups. Of course, test compounds can also be administered by topical or systemic route.

Evaluation of the vasculature from retinal flat mounts
Following euthanasia, the eyes are dissected and retinal flat mounts are prepared and stained for Isolectin B4 for vascular evaluation: avascular areas (AVAs) and areas of neovascularization (NV) are quantified.

The total number of microglia can be estimated from retinal flat mounts stained for the microglial marker, Iba1. At Experimentica, we use stereology to provide a standardized and bias-free quantification.

At Experimentica, we specialized in the longitudinal in vivo imaging of the eye and have validated the use of fluorescein angiography (FA) and spectral-domain optical coherence tomography (SD-OCT) in the rat oxygen-induced retinopathy model. Using a Heidelberg Spectralis FA system and a Leica Microsystems/ Bioptigen Envisu SD-OCTs, we can achieve industry-leading resolution to quantify subtle changes in the disease pathology (Figures 4-5).

Flash electroretinogram (fERG) can be used to measure the electrical activity generated by the neural and non-neural cells in the retina in response to a light stimulus and serve as a functional readout to determine the effect oxygen-induced retinopathy causes on retinal neuron function (Figure 6).